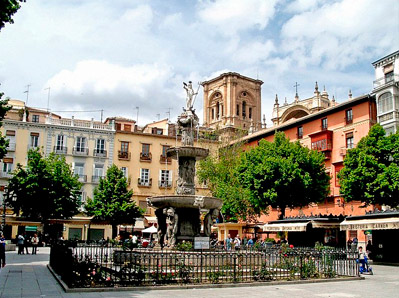 The city of Granada is placed at the foot of the Sierra Nevada mountains, at the confluence of three rivers, Beiro, Darro and Genil, at an elevation of 738 metres above sea level yet only one hour from the Mediterrean coast, the Costa Tropical. At the 2005 census, the population of the city of Granada proper was 236,982, and the population of the entire urban area was estimated to be 472,638, ranking as the 13th-largest urban area of the Spain. About 3.3% of the population did not hold Spanish citizenship, the largest number of these (31%) coming from South America. Its nearest airport is FGL Airport.
The Alhambra, a Moorish citadel and palace, is in Granada. It is one of the most famous items of the Islamic historical legacy that makes Granada a hot spot among cultural and tourist cities in Spain. The Almohad urbanism with some fine examples of Moorish and Morisco constructions is preserved at the part of the city called the Albaicín.
Granada is also well-known within Spain due to the prestigious University of Granada and, nowadays, vibrant night-life. In fact, it is said that it is one of the three best cities for college students (the other two are Salamanca and Santiago de Compostela).
The pomegranate (in Spanish, granada) is the heraldic device of Granada. 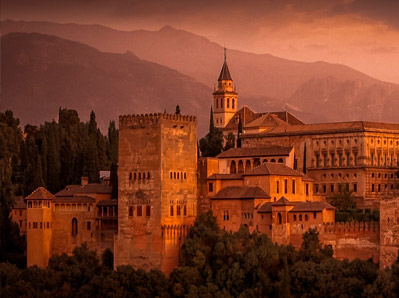 The Alhambra (from Arabic الْحَمْرَاء = Al-Ħamrā', literally "the red one"; the complete name was الْقَلْعَةُ ٱلْحَمْرَاءُ = al-Qal'at al-Ħamrā' = "the red fortress") is a palace and fortress complex of the Moorish rulers of Granada in southern Spain (known as Al-Andalus when the fortress was constructed during the mid 14th century), occupying a hilly terrace on the southeastern border of the city of Granada.
Once the residence of the Muslim rulers of Granada and their court, the Alhambra is now one of Spain's major tourist attractions exhibiting the country's most famous Islamic architecture, together with Christian 16th century and later interventions in buildings and gardens that marked its image as it can be seen today. Within the Alhambra, the Palace of Charles V was erected by Charles V, Holy Roman Emperor in 1527.

The Generalife or summer palaces 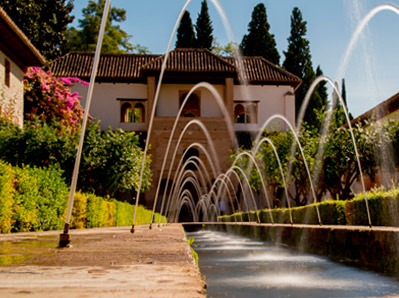 Gardens of the Generalife, Granada

The Palacio de Generalife (Arabic: Jannat al-'Arif - Architect's Garden) was the summer palace and country estate of the Nasrid sultans of Granada.
The palace and gardens were built during the reign of Muhammad III (1302-1309) and redecorated shortly after by Abu I-Walid Isma'il (1313-1324).
A view of the Alhambra from the Patio de la Acequia.The complex consists of the Patio de la Acequia (Court of the Water Channel or Water-Garden Courtyard), which has a long pool framed by flowerbeds, fountains, colonnades and pavilions, and the Jardín de la Sultana (Sultana's Garden or Courtyard of the Cypress). The former is thought to best preserve the style of the medieval garden in Al-Andalus. Originally the palace was linked to the Alhambra by a covered walkway across the ravine that now divides them. The Generalife is one of the oldest surviving Moorish gardens.
The present-day gardens were started in 1931 and completed by Francisco Prieto Moreno in 1951. The walkways are paved in traditional Granadian style with a mosaic of pebbles: white ones from the River Darro and black ones from the River Genil. 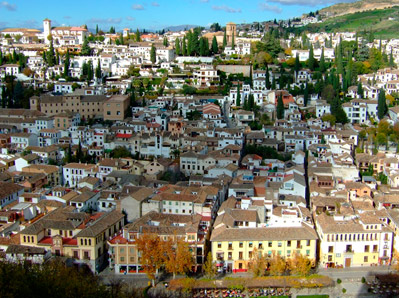 Albayzín (also written as Albaicín), located on a hill on the right bank of the river Darro, is the ancient Moorish quarter of the city and transports the visitor to a unique world: the site of the ancient city of Elvira, so-called before the Zirid Moors renamed it Granada. It housed the artists who went up to build the palaces of Alhambra on the hill facing it. Time allowed its embellishment. Of particular note is the Plaza de San Nicolas (Plaza of St Nicholas) from where a stunning view of the Alhambra can be seen. 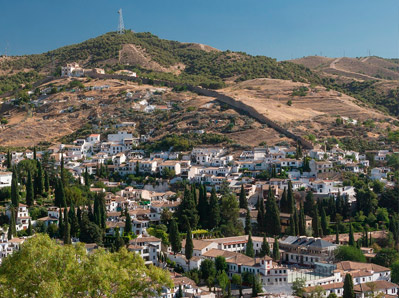 The Sacromonte neighborhood is located on the extension of the hill of Albaicín, along the Darro River. This area, which became famous by the nineteenth century for its predominantly Gitano inhabitants, is characterized by cave houses, which are dug into the hillside. The area has a reputation as a major center of flamenco song and dance, including the Zambra Gitana, Andalusian dance originating in the Middle East. The zone is a protected cultural environment under the auspices of the Centro de Interpretación del Sacromonte, a cultural center dedicated to the preservation of Gitano cultural forms. 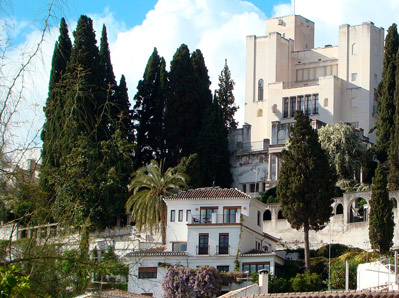 Realejo was the Jewish district at the time of the Nasride Granada. The Jewish population was so important, that Granada was known from the Al-Andalûs Country under the name of Granada de los judios (in Arabic, Garnata Al Yahood). It is today a district made up of many Andalusian villas, with gardens opening onto the streets, called Los Carmenes. 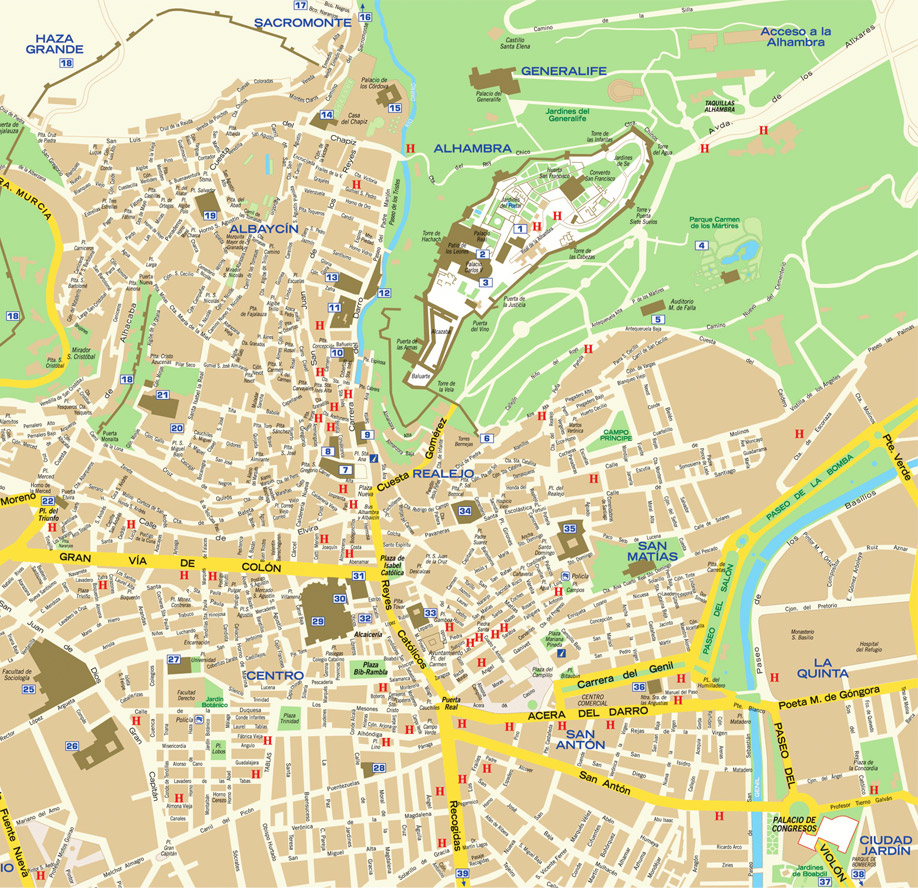